For a while now i've been thinking of writing some reviews of albums by local bands and musicians. Local to the Hastings area that is.

I used to write periodic reviews for my local newspaper and therefore sent this one into them recently. But, because they apparently don't have room for local album reviews, it has not been printed. I can't say i understand that reasoning, but there you go.
There is a chance that come October this situation may change, we'll see.

Meanwhile, here is that first review.
I intend to do some more. Especially if i get the source material and also if the local paper find room to print them. 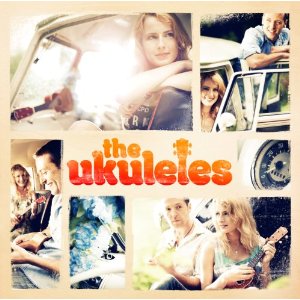 Just recently it seems to me that you can’t turn on the tv, or the radio without someone talking about ukuleles and how they are back in fashion.
Part of that media interest has been centered around this new album by The Ukuleles. I’ve seen this duo on two tv shows over the past few weeks alone.

But, did you know that The Ukuleles include local man Logan Wilson, who plays in the Hastings area on a regular basis and who has released two solo albums over recent years? Both of which were released on a local record label and both of which i’ve had the pleasure of playing on local radio.

Neither of Logan’s solo albums, "Geography" (2006) and “This Luxurious Life”  (2010) feature a ukulele. But, they have included the mandolin and bazouki, which does suggest that Logan has an affinity with lesser used musical instruments.

The Ukuleles are Logan Wilson and Martha Paton.
The story goes that they met at a music festival in Brighton, where Martha was playing a ukulele. This sparked something in Logan and The Ukuleles were born.

This eponymous album, released on the DMG label, contains 16 tracks, all bar one of which is a cover version. The exception being “Sky”, a track originally on Logan’s “Geography” album, albeit a slightly different version.

On first listen, it was these cover versions that grabbed my attention. Because the vast majority of the songs are fairly recent chart hits, such as “Price Tag”, “Rolling In The Deep” and “Forget You”, my initial thought was, who is this album actually aimed at?
My reasoning being that these performances are really just straight forward cover versions, but with added ukuleles. After the tv appearances that i’d seen of The Ukuleles, i was expecting different arrangements of these very well known songs. Maybe more stripped down versions to accentuate the use of the ukulele?

For that reason, my two favourite tracks from the album are “Sky”, which is a pretty laid back song anyway and “Over The Rainbow”, which is a stripped down version with a very understated arrangement.

Having said all of that, the album is definitely a “grower”.
It is well produced, Logan and Martha obviously work very well together and the vocals are strong from both of them. Logan also plays most of the instruments on the album including drums and keyboards, apart from the obvious ukulele.

The album is also very easy on the ear and made the perfect accompaniment to a recent long car journey. It even had me singing along to songs that i’m not really that keen on. Just think yourselves lucky that you weren’t there to witness that!

And, if you buy the album itself, rather that downloading it, the cover art features diagrams of how to play four different chords on a ukulele.
So, if listening to this album makes you want to join the current surge in ukulele playing, it will also give you a head start on the opposition.

Amazon UK: The Ukuleles You can listen to snippets of the album tracks there.