I'll admit straight off, that i've never really been much of a fan of what is called "modern art".
I see the candidates for each years UK Turner Prize and often think to myself, "What the hell?". And i know that i am not alone in feeling this way.
I also know that i am in no way an expert on this type of art and fully accept that. Therefore, i tend not to "get" a lot of it.
But, there is some modern art that i do like and appreciate and i am quite happy to have a look and give it a go.

Well, today i went to see some modern art, at the De La Warr Pavilion in Bexhill. A few miles along the seafront from my home.

The building itself could be considered a piece of art and is a famous example of 1930's "Modernist" architecture. In fact, it was the first British building built in this style and 2010 is actually it's 75th anniversary. It even has a slight Indian/Moghul look to it. A throwback to the days of Empire perhaps?

I love the building and the architecture and was very pleased when it was recently renovated, after many years of relative neglect. Having said that, i had only ever gone inside the actual building on a couple of occasions before today. I have walked and run past it, on the seafront promenade, hundreds of times. But, i just didn't get around to taking those few steps to the side.

It must be said that since the renovation, the De La Warr Pavilion has taken on a new lease of life and is a completely different prospect to what it once was and probably far more popular too. It has become a place that now focuses on art, in it's many forms. This has not always pleased everybody, especially some of the locals. But, i do believe that the De La Warr Pavilion is now gaining a lot of respect, both locally and nationally. Hence the fact that they are now in a position to house the exhibitions that i went to see today. Both of which were free by the way. 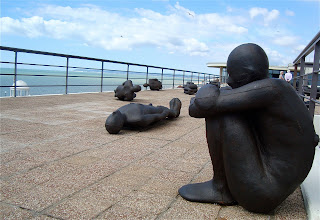 The first was a rooftop installation by Anthony Gormley, called Critical Mass.
This exhibit consists of a series of 60 life size cast iron statues. All made from 5 different casts of the artists body and they are laid out across the roof of the building.
Although i have never actually seen any of Anthony Gormley's work before. I have seen many images and films of his various exhibits. The famous of which are probably, the Angel of the North and Another Place.
I have always liked the idea of his work and have wanted to see some of it for a while now. Partly to see if it lived up to expectations. I'm pleased to say that it did. At least on this occasion.
Although, i can't pretend to have understood all of what was going on. I just loved the actual statues themselves. The fact that they are life size and so realistic, probably helps with the overall effect. And seeing them in that location must make a difference. The building itself and the backdrop of the English Channel makes it a great place to view any work of art.
Critical Mass runs until the end of August 2010. 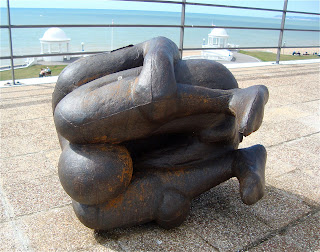 The second exhibition was an installation, on two floors, by the Japanese artist Tomoko Takahashi, entitled, Introspective Retrospective.
Now, this one i had a little more difficulty with. The artist "has established her reputation through the playful recycling of the detritus of everyday life into illuminating works of art" and a lot of her raw materials are scavenged from skips. You could, rather unkindly, say that her work is quite literally, a load of old rubbish (I'm sorry, but i couldn't resist that)

The exhibits downstairs i found quite interesting. Especially a brand new installation called "Paper Work @ the Seaside". This consisted of a huge walk in box. This box was filled with, what at first appeared to be scrap paper. It was in fact thousands of black & white photocopies, mostly stapled to the walls, from Japanese Manga comics. These were grouped into various categories and was very effective.
As before, i can't pretend to have understood all that was happening here. But, it was an interesting spectacle nonetheless. 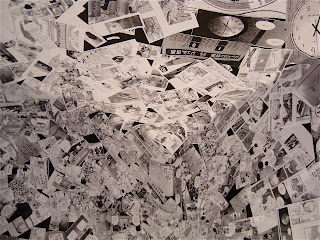 The exhibits upstairs though, i found to be completely beyond me.
This, to me at least, really did seem to consist of rubbish and discarded items randomly strewn across the floor. Some of it did seem to be connected. There were many clocks amongst the "rubbish" for example. One of the people with me did think that it might all repesent work in some way. But, i'm afraid to say that i couldn't see that.
Still, at least i can't complain that it wasn't interesting.
Introspective Retrospective runs until 12th September 2010.

So, what did i make of my first proper taste of modern art?
Well, firstly, i must say that i'm very glad that i went. Although i didn't enjoy everything that i saw, it was well worth the effort of going and i would happily do so again.
The fact that works of this kind are available to see locally and freely too, can only be a good thing. It gives the "ordinary" person the chance to see and experience new forms of art. Art that they might otherwise make no effort to go and see.
Just because i didn't enjoy it all, doesn't mean that others won't. In fact, my wife and i have just been trying to persuade my son to go to the exhibitions and have a look for himself. He might not "get it" either. But, at least he'll have the opportunity to make up his own mind.

I think the one thing that will stick in my mind about today though, is something my wife said and something that i fully understand. It was about the minds of the artists who create these works of art.
Somebody like myself, just cannot get into the head and the imagination of the person who produced these art works in the first place. I'll admit that sometimes i'm not sure that i would want to be inside that mind.
But, it does go to show that we are all different and that we are all individuals.
The world would be a far less interesting place if we were all the same.