Today i attended Pirate Day in Hastings, my home town. This is a part of the week long Old Town Carnival Week celebrations.

The main part of this years Pirate Day, which only started in 2009, was an attempt on the official world record for the amount of pirates ever to be gathered in one place. The record had recently been broken by the good people of a town in South Carolina. Although not verified, it was thought that the new record stood at approx 2.300 pirates.

Now, that's a lot of pirates and i'll admit i wasn't sure that the record would be broken and i know that i was not alone in feeling that.
But, as i walked into town, i could see more and more people, both adults and children, dressed as pirates. By the way, there are strict criteria as to how you should be dressed to qualify as a bona fide pirate.

By the time i got into the main part of the old town of Hastings, it was apparent that pirates were descending on the town in great numbers. And some in pretty elaborate costumes too, as you can see. 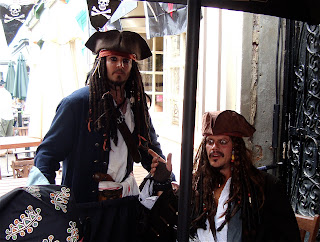 Well, the people of Hastings did not disappoint and the final total, which is adjudicated by Guinness World Records, was an amazing 6,166 pirates! Beating the old world record by nearly 4,000.
Shiver me timbers and Yo Ho Ho, what a wonderful achievement.

As the lady from Guinness World Records said. Mass participation events, like this one, are notoriously hard to arrange. She also pointed out that Hastings is not that big a town for this kind of record attempt. So, to break the record in such a fashion, is a tribute to both the organisers and the people of Hastings.
I'd like to congratulate them both as well.

But, this record breaking achievement doesn't really come as a surprise to those who live here, despite what i may have said earlier.
Hastings has a unique character and punches well above it's weight, when it comes to arranging and publicly celebrating events of this kind.

And that is what i will talk about in Part 2 of this blog post. 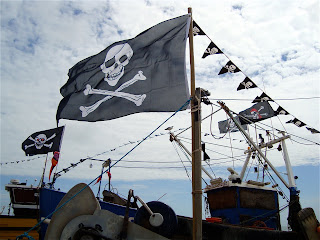 (As you can see, even the fishing boats get into the Pirate Day spirit)
Posted by Andy Gunton at 21:45