Normal service has been resumed.

August in Andalucia means clear blue skies and very hot weather doesn't it?
Well, most of the time it does. But, sometimes, and the past few days are a case in point, things do go awry.

We arrived in Southern Spain on Tuesday of this week. It is now, i believe, Friday.
On our approach to Malaga airport we encountered what can only be described as "interesting air turbulence", caused by some rather large thundery clouds in the area.

Now, i'm not a great lover of rollercoasters. So, this was all rather disconcerting. As it happens, our "ride" wasn't too bad. Maybe that was because we had no idea what was coming next? For me, seeing what's up ahead, on a rollercoaster, gives your mind time to make you as scared as hell and your stomach to start turning somersaults. Before you even reach the next big drop, or jerky movement. My experience on the Simpsons ride at the Universal Theme Park in Hollywood, earlier this year, comes quickly to mind. Although, rather perversely, i actually ended up enjoying that. I'm still trying to figure out why though.

Thankfully, we landed safely, if a little bumpily.
It turned out that this part of Spain had recently been suffering with some rather unseasonal wet weather. The previous period had been extra hot and humid and this had lead to the heavy cloud and, in places, some very heavy rain.

Having been to Andalucia, in August, three times before, we realised how unsual this weather was and our hosts just reiterated that. We have seen clouds before and some heavy looking ones at times too. I guess this often happens in a fairly mountainous area? But, these have always burned off and never amounted to any actual rain.
So, we were expected pretty much the same, this time around.

As we got towards Orgiva, the clouds seemed to be hanging above the hills and mountains that surround the village. Now, this is not quite as bad as it might seem. Because, clouds here seem to come and go pretty quickly. So, all was not lost. Although, it was all a little bit worrying.

The rest of Tuesday was a mixture of clouds and sun. Although, we could tell that the sun just didn't feel quite as warm as usual.
During the evening, we were sitting quite contentedly outside, when we felt raindrops. A quick look at the surface of the pool confirmed that it was raining, in Spain, in august! It didn't last for long. But, it was an indication of things to come.

Wednesday was a mixture of clouds and sun, which i felt was not a bad thing, as it helped to protect us all from getting too much sun, too quickly. Almost a blessing in disguise really.
The cloud bubbled up again during the afternoon and we all managed to get caught in a sudden shower, whilst walking home from the town. As the rain was warm, this was quite refreshing and also, if the truth be told, a bit of fun too.

As we went to bed that night, the heavens opened and it started to pour down and from what we could tell, it rained pretty hard throughout the night. It was certainly very wet underfoot when we woke the next morning.
According to Ainsley, one of the owners, there had been very heavy rains in other parts of Andalucia overnight and landslides that been reported and a car washed away near Cordoba. All very worrying.

I quickly consulted the Internet, which suggested that the weather would clear that day, Thursday and that from then on, the weather would be "normal". Sun, sun, sun.
Sure enough, at around 2pm, all the remaining clouds disappeared, the sun appeared and the temperature shot up. It was almost as if a switch had been thrown.

Thankfully, since then. Normal weather service has been resumed and the sky has been it's usual cloudless self.
So, hopefully, our holiday weather adventure has reached it's end.
Let the fun begin. 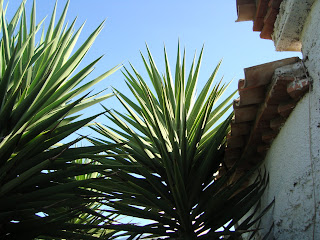