Anyone who reads these blog posts, views my photo's or even watches my videos will know that I'm a big fan of street art. And by that I don't mean the kind of mindless tagging that turns up on walls etc across the world. I consider that to be graffiti.
No, I'm referring to the kind of art that actually enhances the walls etc that it is painted, sprayed, or stuck onto.

In the Hastings and St Leonards area we are very lucky to have many examples of great and original street art. Apart from our very own Banksy, we have several works by Ben Eine, animal stencils by Stewy and of course the Scrabbleman pieces, as well as countless other examples dotted around the town.

I'm also lucky to live in an area that I've called 'Street Art Central' before. I called it that because of the numerous examples that have appeared in the area over recent years. One such place is in an alleyway off of Norman Road, in St Leonards.

The first artwork to appear there was a stencil, by Stewy, of a full size white horse: 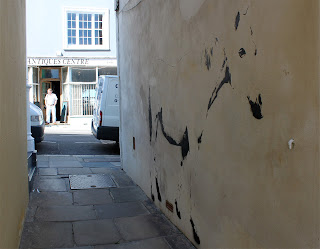 It didn't take long before that was followed by one of the first Scrabbleman pieces, as well as a colourful rectangle: 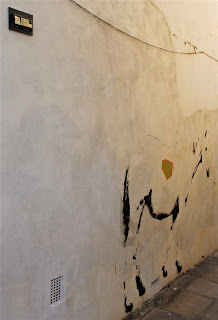 A few months later they were joined by this: 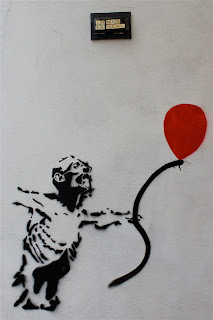 Of course, all of this art suddenly appearing does raise the question about whether it should be there in the first place. This is especially relevant if it happens to be your wall that all the street art is painted onto.
I know that Stewy always asks permission before doing a stencil, but how many other artists do the same?

That very question was brought home to me today when I spotted this new addition to the wall: 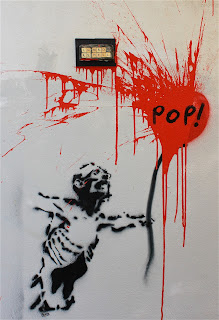 The balloon explosion actually happened a few days ago, but the 'Pop!' appeared overnight.
After spotting it this morning, I went home, grabbed my camera and took this photo.

Whilst there taking my photo's, the occupants of the two houses either side of this alleyway appeared. On seeing the new 'Pop!' addition, it was firstly obvious that it was brand new and secondly that they weren't very happy about it. I was even questioned as to whether it me that had done it.

I explained that i wasn't responsible and that I was simply taking some photo's, as I really liked it.

Some may see the 'Pop!' and also the 'balloon explosion' before as some kind of desecration of the original piece. But, for me that's just a part of what street art is all about. It's temporary, for many reasons and I also feel that although the original piece has been altered, it has also been added to and possibly even enhanced.

My opinion was altered a little when it was explained to me that when the 'balloon explosion' took place, the 'artist' splattered paint not just on the wall, as seen above, but also onto the pavement, road and even onto cars that were parked nearby!

Now, that's something I couldn't defend.
It's one thing to have street art appear on the wall of your property, but quite another when it actually damages, or affects your property in some way.

I'd hate to see street art such as this be removed, or painted over because of the unthinking actions of, probably, one person.
As I've suggested, I think street art of this quality really does enhance the area that it is in and it can even become a sort of tourist attraction, as these pieces have.

So, if you're a street artist please spare a thought for those who's property you may be using as a canvas for your work. And maybe do as 'Stewy' does, ask permission first.

By the way, I'd love to have a piece on my garden wall.