I'm not one for making New Year resolutions, something I've talked about here before and which I'm intending to write a new post about soon by the way. But, if I was, one thing that would feature would be getting out into the great British countryside and doing some walking.
Walking is something I started to do some years ago now, mainly as an alternative to running as my knees were starting to grumble about that.
But, due to seeming to have less time over the past two years, for the right reasons I might add and also because you just get out of the habit of doing something, I've not done any 'proper' walking during that period.
So yesterday I decided that now was the time to try and get back into that habit, but where to go?

One of the great things about walking is that it can take you to new, interesting and sometimes spectacular places, places that you would probably never visit and see otherwise. That's usually because they are a bit out of the way, which is what I prefer anyway.
Of course walking can be done just about anywhere, but I've always preferred to go to places that allow you to be in relative solitude.
Going for a walk with a large group of people, who spend their whole time talking, seems to defeat part of the object of going to these places in the first place. That's not to say that I don't enjoy company when walking, even though I find myself walking alone more often than not.
The shared experience of a nice walk, in scenic surroundings and with good company, is something not to be sniffed at. But personally I'd draw the line at a maximum of four people and to be perfectly honest would probably prefer it to be less than that.
That's one reason why I tend to walk during the week and not at weekends. There are less people around to disturb you and you often have the whole area to yourself, which can be a pretty special experience. 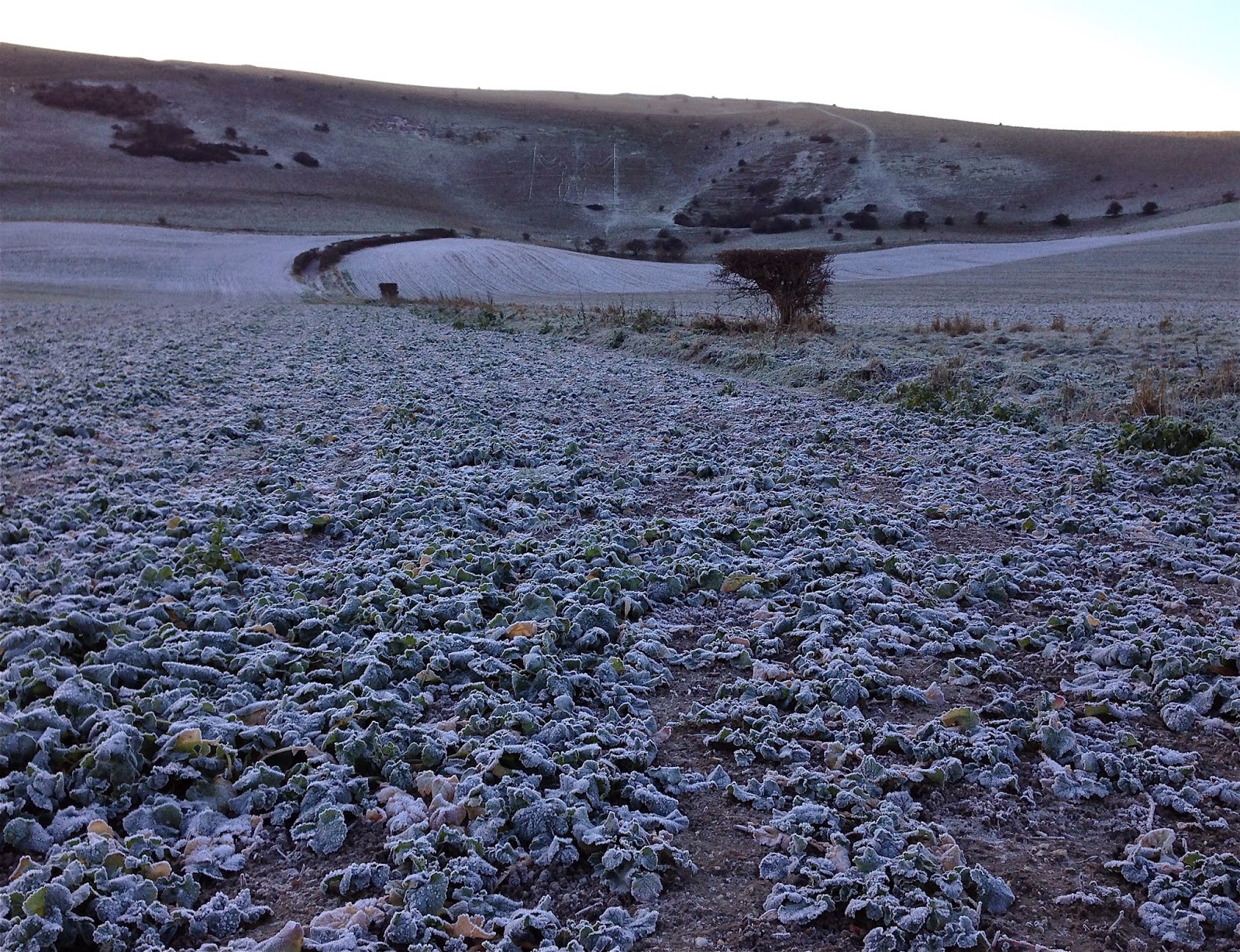 When faced with a choice we often choose the familiar, which is why I ended up in one of my favourite spots in the East Sussex countryside yesterday, the area around the Long Man of Wilmington.
It's an area I've walked around many times before. Wilmington is only a 40 minute drive from my home and the area contains all the elements that make a great walk. Stunning scenery, history, wildlife and the challenge of some fairly tough walking conditions, with some steep climbs, as the photo above suggests.

Yesterday had the added bonus of frost as thick as snow and natural light that was simply amazing to behold. These two videos shot from part way up and at the top of the hill, in the photo above, will hopefully show all of that?

As this was pretty much an unplanned walk, I had no idea where I was going to walk after I got to the top of Windover Hill. After much indecision, I did a circular walk which brought me back to the Long Man via Alfriston, a pretty village now rather spoiled by traffic. A victim of its location and beauty perhaps?
Alfriston does host the first property ever bought by the National Trust though, namely Clergy House and a church sometimes called "The Cathedral of The Downs". 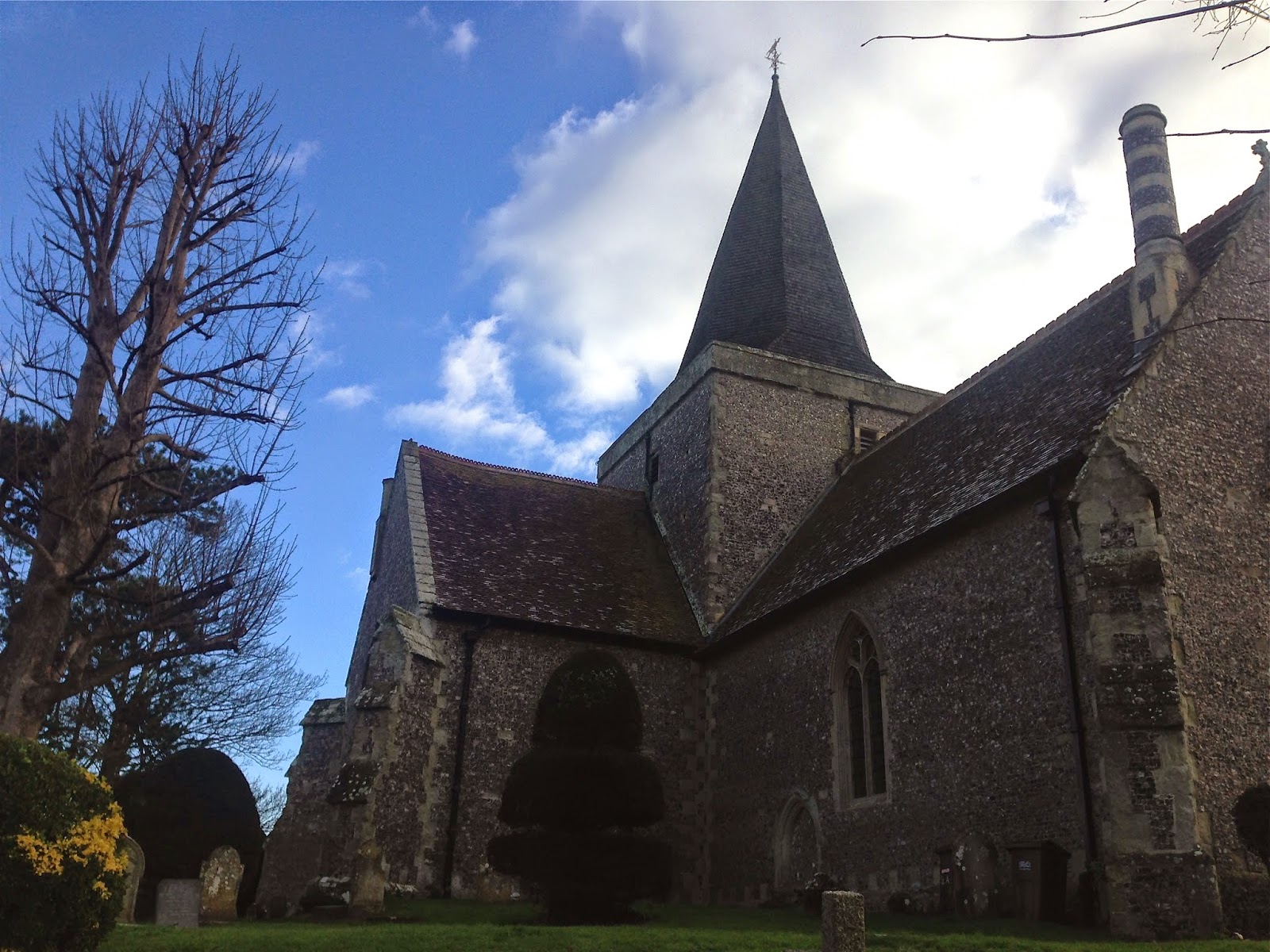 What Alfriston doesn't have though is any mobile phone coverage, at least not on my network anyway. I know this isn't something that should concern you when you're enjoying a walk to supposedly get away from it all. But if you compare that to the top of Windover Hill, in the prescence of ancient burial mounds and mystical hill figures, which has perfect 4G coverage, it does make you wonder.
From Alfriston, in the Cuckmere valley, it's a steep climb back to the top and a final chance to pause and take in the view, before the descent back down to the village of Wilmington.
Although it's only an estimate, I think I walked a total of around seven miles. Like a fool I forgot to take my pedometer with me, next time...
Nevertheless the crisp, fresh air and exercise were what I came here for, not to worry about the amount of miles I'd covered in the process.

For the vast majority of this walk I was alone, with not another soul in sight, but one nice aspect of walking in areas such as this, is that everybody you do meet says "Hello" or "Good Morning" to you. Maybe it's a recognition that you are a like minded soul, someone who appreciates where they are and the effort that it took to get there? 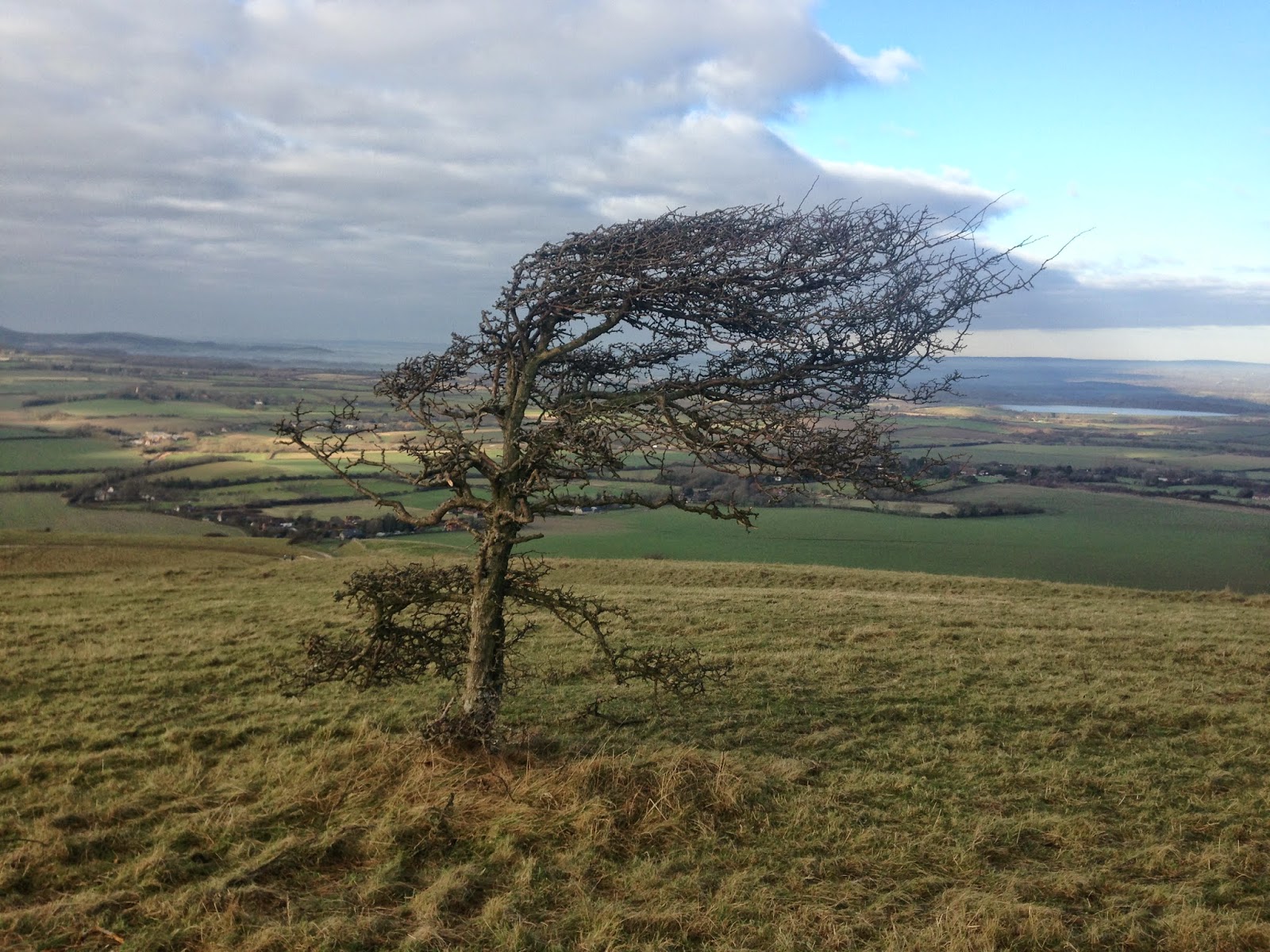 It doesn't matter how many times I walk around this area, there is always something new to see and discover. That's as good a reason as any to keep returning.
The photo above is of something very familiar to me though. This tree, once again on the top of Windover Hill, can be seen from the railway line mentioned in one of those earlier videos.
I've travelled on that line hundreds, if not thousands, of times and on just about every occasion I have looked across, through the train window, and seen that tree standing there.
Over the years, from before I'd ever climbed this hill, this tree has become a favourite landmark of mine. As you can see, Windover Hill is aptly named and I suspect that one day the wind will take its toll, but I hope that that day is well into the future.

To prove that you never quite know what you're going to find, or see, when you venture out into the countryside. Just as I was approaching Wilmington at the end of my walk, I came across a man walking his dog and 'flying' his pet Harris's hawk. A beautiful bird, and one I'd never seen before, but not something you expect to see sitting on a hedgerow when you come round a corner on a public footpath!
A surprising, but very welcome, end to a lovely stroll and a reminder, as if one were needed, of why I really should do this more often.
The 'plan' is that I will do just that.
Watch this space, as this is a topic I may well be returning to in the future.

PS: All video and photo's were taken by myself using my iPhone.
Posted by Andy Gunton at 20:29