"The past is a foreign country, they do things differently there"

That quote is actually the opening line to L.P Hartley's classic 1953 novel, 'The Go-Between'. If that statement was true back then, it is still equally as relevant today, if not more so.

This was brought home to me on Friday when I was lucky enough to attend a preview for the 'Ladybird By Design' exhibition at the De La Warr Pavilion in Bexhill. The exhibition, which started yesterday and runs until 10th May, is a celebration of 100 years of Ladybird books.

For anyone of a certain age, the mere mention of Ladybird books will usually transport you back to your childhood. If you were a child, or even a parent, between the late 1950's and the early 1980's you will probably have vivid memories of reading at least some of the 600+ titles that have been produced by Ladybird during their 100 years. These books have been read and treasured throughout those 100 years, but those years mentioned above were certainly their heyday.

While the books themselves will bring back childhood memories, it is the artwork and illustrations, that were specially commissioned for the books, that will really take you back to that bygone age. 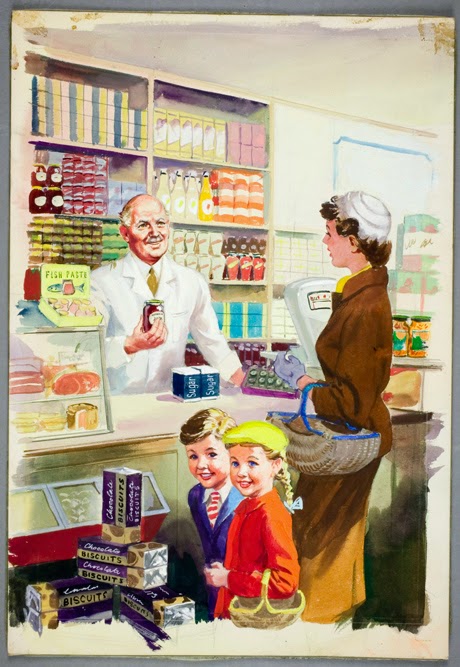 Whichever series of Ladybird books those illustrations come from, be it People At Work, Shopping With Mother, Aventures From History, How It Works etc etc, the sheer quality and attention to detail of the artwork springs out at you from the page.

The exhibition itself houses over 200 examples of the original artwork that graced those books. These are the actual illustrations that went into the finished books and they come complete with the artists annotations and notes. This is the first time that such an extensive collection of these artworks has ever been collected and displayed together.

For more about the history of Ladybird books and to see many of the images used in the exhibition, it is well worth watching this offiical video. Included in this video is Lawrence Zeegan, who has written the 'Ladybird By Design' book which accompanies this exhibition.


Ladybird By Design from De La Warr Pavilion on Vimeo.

I was fortunate enough to be able to walk around the complete exhibition alone and while doing so I found myself scribbling down notes about certain aspects that jumped out at me, or struck me at the time. I'll share some of those here:

These Ladybird books are a time capsule that show a bygone age, albeit a sanitised version.
Since the late 1950's the world has gone through some huge changes, especially with regard to technology, work, class and social order.
We live in a completely different world today, but at least we have a record of those days. These books and their illustrations provide us with what is almost a mini social history of Britain. The vibrancy of the colours and the attention to detail in the artworks really bring that home.

This is a world where the family shop on the high street is still king, before the rise of big supermarkets. A pre Internet, mysterious world, where international travel was a dream, or an aspiration, rather than an regular occurrence and the British Empire is still clinging on in some far flung corners of the globe.
A fast changing, but exciting, world where space travel and nuclear power are the future and computers still fill a whole room. An innocent world, where families left their front doors unlocked and where babies were left in prams outside of those small shops.
A non PC world, where everybody knew their place.
It is also a disappearing world. Many of the trades and jobs portrayed no longer exist and have been replaced by technology, or have been 'outsourced'.

I suppose the question many who lived through those past decades may inevitably ask themselves, especially after walking around these galleries, is "was the world a better place then?"
I've no doubt that some of the grandparents taking their own grandchildren to Ladybird By Design may well think so, but I'm not so sure. After all, this is a view of the world through rose tinted eyes, with not a hair out of place.

The past is indeed a foreign country and they do do things a bit differently there. But like even the best holiday, it is nice to return home afterwards to what is familiar to you.

But don't take my word for it, go and see Ladybird By Design for yourself, you won't regret it.