....that Bob Geldof got the bands to play.

I know that this has come as a bit of a shock to a lot of people. But, 25 years ago today, the Live Aid concerts took place across the world. But, most famously in London and Philadelphia.
Yes. it really is 25 years ago. Now, that makes me feel very old.
Judging from the comments i received when i posted this "news" on Twitter and Facebook yesterday, it makes a lot of other people old as well. Those 25 years seem to have flown by.

I did wonder if the reason why Live Aid seems far more recent, is because it was one of those major events where we can remember where we were and what we were doing when it happened? I could be wrong? But, i do know that i can still remember that hot sunny Saturday in July, very well indeed.
It could also be because of all of the events that led up to those concerts taking place across the globe.

I vivdly remember seeing those original BBC images of the dreadful famine taking place in Ethiopia, in late 1984. I bought the Band Aid single, on both 7 and 12", that came out at Christmas 1984, as did just about everybody else i knew at the time. I also bought the Feed The World t.shirts and i still have a photo of my (now) wife proudly wearing one at the time (And yes, that is me on the left!) 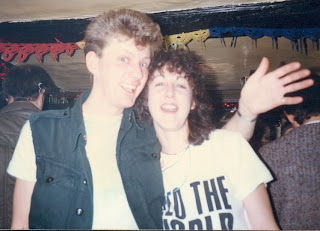 So, all of that could well have a bearing on my memories and why i took so much notice of Live Aid. But, another huge reason is that, at that time, nothing like this had ever happened before. Yes, there had been big benefit concerts before. But, nothing on this scale & certainly nothing that was broadcast live on worldwide TV. The BBC more, or less, abandoned their normal schedule for the day and broadcast the whole event, including the concert in Philadelphia. That type of scheduling had only ever been given to royal weddings, state funerals and moon landings before. So, this was a big deal.

There was also the small matter of the fact that the gigs featured just about anyone who was anyone in the field of rock and pop music, at the time.
So, when the words "It's twelve noon in London, seven AM in Philadelphia, and around the world it's time for; Live Aid ...." were spoken by Richard Skinner. Myself, my friends & countless millions of people around the world, were primed & ready.

I watched as much of the concerts as i could. Although i did miss some of the later performances. Well, it was a hot day and the pub was close to home! Having said that, i did have one of those old fashioned video recorders and taped as much as i could.

So, what do i remember about the music?
The performance i was most looking forward to was by U2. Who at that time were not that well known globally. I remember being very disappointed by their performance & thinking that they had blown a really good opportunity to show what they were capable of. Ironically, the rest of the world didn't agree with me & it has become generally accepted, that it was this Live Aid performance that catapulted U2 onto the world stage. What do i know eh?
Apart from that, i vividly remember:
In London:
Status Quo starting it all off with "Rocking all over the world". Very appropriate,
Paul McCartney effectively singing to himself, because his microphone had broken,
George Michaels yellow shirt (I have no idea why, but i bought one afterwards!)
David Bowie giving up one of his songs, so that they could show "That" video ("Drive" by The Cars) & the effect that that had on everybody.
Bob Geldof stopping the Boontown Rats song, "I don't like Mondays", after the words "And the lesson today is how to die..." And the effect that that had on the crowd.
Queen - Their whole set was amazing,
Phil Collins using Concorde to fly betweem London & Philadelphia, so that he could play at both venues.
In Philadelphia:
Madonna, who wasn't very well known then.
"Led Zeppelin", who weren't very good at all. but, at least they were better than,
Bob Dylan (with Ronnie Wood) who was awful & upset many people for suggesting that some of the money raised should go to American farmers instead!

It wasn't the best gig in the world. But, then that wasn't really the point, was it?
Live Aid raised a huge amount of money, for a very good cause & it changed the future of rock gigs forever. Just think of how many more big campaigning gigs have taken place since Saturday, 13th July 1985..