Now, this really does make me feel old.

Today, is the 41st anniversary of man first walking on the surface of the moon.
Yes, i realise that if you live in different parts of the world, this may well have happened for you on July 20th.  This does raise the question as to what time it was on the moon at the time? Do they have time zones up there?

I was 11 years of age at the time and remember the occasion very well.
I have always had an interest in astronomy & space travel. So, this was a big deal for me. I had followed as many of the Apollo missions as my age enabled me to. I can remember those pictures of the earthrise coming back from the Apollo 8 mission and the effect that that had on everybody. It was, after all, the first time that the earth had been viewed, by us ordinary mortals, from space. Those pictures are still as amazing to me as they have always been. 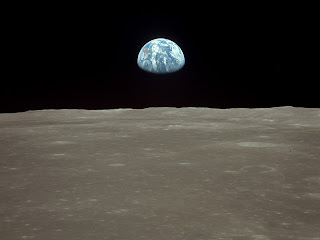 On the morning of July 21st, 1969 i was woken by my father so that we could sit down and watch Neil Armstrong and Buzz Aldrin make their first steps on the lunar surface. We had, of course, been watching hours earlier as the lunar module had made it's descent down to the moon.
It was around 4am in the UK at the time. So, this was not a normal wake up call and i can't imagine my father letting me sit up and watch tv, at that time of day, for anything other than an occasion such as this.
Looking back at those old black & white tv clips of the footage, it really does seem a world away from today. But, those tv pictures were true space age technology to us back then and were viewed with a real sense of wonder.
At it happens, i don't really remember that much about actually watching the footage at the time. More about the occasion itself. The details have probably been lost in the mists of time. Well, it was 41 years ago.

Those 41 years have really flown by and i often wonder where they have gone. So, yes, this anniversary really does make me feel old. But, i wouldn't have missed watching it for the world.

My only regret is that, despite my boyhood ambitions, i never got to appear in a photo like this. 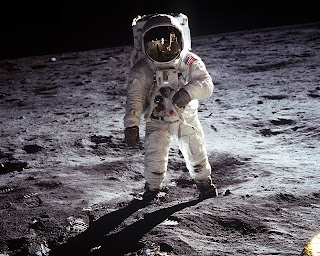 Oh well. I guess you can't have everything in life?
Posted by Andy Gunton at 11:10