Here i was sitting down to write a blog post all about the record company EMI trying to sell the famous Abbey Road Studios in London. When i happened upon this item on the BBC News website.

When i first saw the news reports the other day, suggesting that the studios were up for sale, i was horrfied. As i suspect many other music lovers were.
We have lost so many heritage sites over the years, in the UK & this would have been one site too far. I'm not just referring to sites of musical interest either. We have lost many historical sites, from all ages of history. Sites, that once they have gone, can never be brought back.

I can still remember going to Liverpool, in the late 1970's & finding out that the original site of The Cavern Club was now a car park! As Joni Mitchell sang in her song "Big Yellow Taxi", "You don't know what you've got 'till it's gone"
How true & prophetic those words have come to be.

When you realise the vast musical history & all of the great musicians, from across the years, that have passed through the doors of Abbey Road Studios. It really makes you think what we might have lost, had those studios been sold. 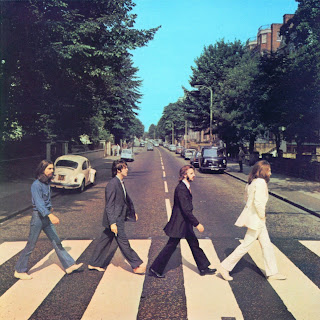 Although Abbey Road Studios are most famous for the recordings of The Beatles & were immortalised by the Abbey Road album. Abbey Road Studios have played host to many great musicians, including Sir Edward Elgar, Pink Floyd & Radiohead, amongst many, many others.

Because of The Beatles & also because of THAT album cover, the studios themselves have become a tourist attraction. Who could not resist walking across what is probably the most famous zebra crossing in the world?

Personally, i have never visited Abbey Road & have never walked across that crossing.
At least i now may well get the chance to do so.

Postscript:
The UK Government has now announced that Abbey Road Studios are going to be given "Listed Building" status. Which is great news.
More details here: BBC News
It seems that people are now starting to realise the importance of this piece of British musical heritage.
Posted by Andy Gunton at 21:21