Every Picture Tells A Story, Don't It?

Anyone who has ever seen the cover of that album, especially the original vinyl version, will probably remember it & if not, here is a reminder: 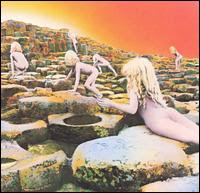 The programme was about one of the young children, who featured on the album cover. Despite there being several images on the cover, there were actually only two children. A brother & sister.

I must admit, i always thought, as did my wife, that the children on the cover were actually Robert Plant's. The singer with Led Zeppelin.
That is obviously not the case. The two children concerned were in fact models, who were used to appearing in adverts.

Well, the premise for the programme was that the boy in the photo, Stefan Gates, was somehow disturbed by that image. He saw it as almost apocalyptic, with the naked children climbing over the rocks, towards a strange orange sky.

Throughout the programme, both my wife & i kept looking at each other with an increasing sense of incredulity. It was very obvious, to us at least, that Stefan was making far too much of his "fears".
He was concerned about the child nudity, the disturbing vision that the cover art suggested & a feeling that he & his sister had been somehow exploited to produce the image.

He interviewed his mother, sister, the photographer & a respected Rock Music critic. All of whom seemed to think that he was making far too much of this. His sister even said as much.
The programme concluded with Stefan making a strange kind of pilgramage back to the Giants Causeway, in Ireland, where the famous photograph was taken.
Whilst there, it turned out that he had never actually heard the "Houses Of The Holy" album! WTF?

So, what's the point of this blog you ask?
Well, two points actually.

The first being that this, to my wife & i at least, was just an excuse to make a radio programme & possibly get some kind of attention from it. After all, i had never heard of Stefan Gates before today & i consider myself to be a big Led Zeppelin fan.
If he was really that disturbed about this whole episode, why did he have to go on national radio & make a big song & dance about it all? And make himself look a bit of an idiot in the process.
I have many ideas for possible radio programmes. Maybe i should submit them to the BBC?

My other point is that this is yet another case of somebody making a mountain out of a molehill.
Stefan spent the whole programme, reading far too much into what the real meaning of the album cover was & therefore worrying about it
Even the original photographer told him that it didn't really mean anyting. In common with many more album covers & especially those made by the "Hipgnosis" group, who actually designed this cover.
Hipgnosis are also famous for designing many Pink Floyd album covers.
Maybe Stefan can tell me what they're all about? I've been trying for nearly 30 years & haven't figured it out yet!

Art is so often misunderstood & so much, that often isn't really there, is read into it.
Apart from being misleading, that could also end up being dangerous.

Well, that's it, rant over.

There's just time for me to tell you that "Houses Of The Holy" is actually one of my favourite Led Zeppelin albums &, in my humble opinion, a very much under-rated album too.
OK, so it does have a couple of their worst songs on there. But, the rest are all crackers.

Guess what i'm listening to whilst writing this?
Yep.....
Posted by Andy Gunton at 19:11